Adventures in Mold Making Part I - Plaster Sprigs for Pottery

Making pottery making is extremely labor-intensive, so we look for aids to reduce labor and time wherever we can find them. Molds are one of the oldest tools potters used to create functional objects that were affordable and beautiful.

There are many kinds of molds and forms used to make pottery. The most common type of material is bisque-fired clay, which is extremely porous. The potter makes the "negative" model out of clay, then fires the model to bisque temperature. That piece then becomes the mold that moist clay can be pressed into or around (or poured into, for slip-cast pieces). The porous bisque, which is dry, allows for the easy removal of moist clay while keeping the shape and decoration of the original mold.

Molded, or "plastic", pieces were common in history, as it allowed a potter to create multiples of popular decorative and functional pieces. (The term "plastic" is derived from the German word plastik, meaning sculpture).

One of the best examples of the ancient use of molds for pottery are the many Herodian lamps that were made throughout the lands of the Mediterranean. Lamps were need by every household, so a lamp maker needed to be efficient with their resources. Bisque-fired molds were formed, and often carved with elaborate decoration (although not for for every household!).

This is a Roman mold found in North Africa and dates to about 500 A.D. The two pieces - the top and the bottom of the lamp - were pressed into the mold halves, and then the whole mold was pressed together. Here's a good replica to show how the pot looks after the two sides of a press mold are separated. The Herodian lamps came in may shapes and sizes, and were an efficient way of burning just about any kind of oil. (By the way, they usually used rushes or other plant matter soaked in oil for their wicks.)

Sometimes a molded (plastik) form was added to a wheel-thrown or coil-formed piece, like this vase from ancient Greece. 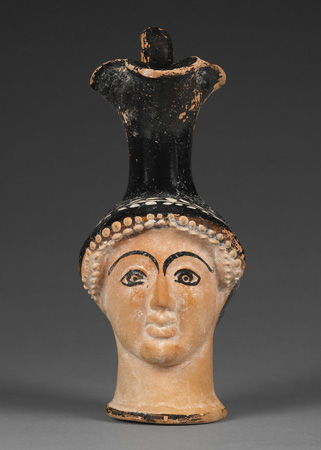 Sprig molds, are forms made of plaster or bisque-fired clay that are used to create multiples, usually decorations, in ceramic production.  Clay is pressed into the molds, and then carefully removed. These "sprigs" of clay are then applied as raised decoration on stoneware pieces.

Sprig molding as a form of ceramic ornamentation was used as early as the first half of the fifteenth century on German stoneware, but really took hold as an art form when used by the British potteries of Staffordshire in the late 18th century. Wedgewood, Spode, and others originally used sprig molding to emulate embossed ornaments on silver teapots. Perhaps the most famous example of sprig molding in British ceramic history is Wedgwood’s late eighteenth-century replica of the first century AD Roman glass Portland.

Modern sprig molds are either commercially made for the ceramic trade, created by individual artists. Commercial molds are usually made of plaster, and come in many different designs and sizes.

We use some commercial sprig mold for our projects. However, I also use many molds (and stamps) that I've carved from original designs. The molds are either carved directly into clay and then bisque-fired. Or, carved into clay, and then formed into a mold using potters plaster. (Potter's plaster is very fine, similar to plaster-of-paris, but more durable). These are some of the molds I created in the summer of 2015. The molds were designed so that the sprigs fit perfectly on our "Half-Pint" Coffee Mugs. So, this is the result of using the custom sprig mold on our coffee mugs.

In the next blog I'll show you how I converted the mold to be used for soap!